How does it work?

There are several theories on how the Bowen Technique works

One theory suggests that Bowen “moves” stimulate the proprioceptors, which are sensory fibers at the end of the peripheral nervous system. This encourages the body to realign and return itself to its natural state of health. Proprioceptors provide the perception of the body’s position and movement situated within connective tissue, muscle, tendons, ligaments, and fascia.

One type of receptor and in particular the Nociceptor plays an important role in the effectiveness of the Bowen treatment. Nociceptors are preferentially sensitive to noxious stimulus, which is potentially or actually damaging to body tissue. They are sometimes called pain receptors, although this term is misleading, because pain is interpreted at higher levels of the brain. Nociceptors are found in most tissues in the body, but are particularly prevalent in the fascia, a sheet of fibrous tissue, which wraps, encases, supports and suspends muscles, tissue, and other organs of the body. The fascia creates space between each muscle group, individual muscles and individual fibres, right down to the microscopic level, allowing an optimal and healthy movement of fluid to all the muscles and joints in the body.

When the body receives an injury such as a broken toe, the Nociceptors send a reflex response at 70-120 meters/second along the efferent fibres to the thalamus located in the brain. This information is then processed by the cortex and then sent back along different fibres to the trauma site, to begin the healing process, by contracting the muscles and initiating inflammation of the area.

If the pain persists for a long time, the fascia remains contracted to protect the painful part, causing dysfunction or restriction of movement of the tissue it surrounds. Even when the bone has healed, we continue to limp, because the fascia restricts movement and continues to remain in the same position.

With each Bowen move, the fascia is rocked and minutely “disturbed”, but is not forcefully separated. When fascia adhesions are loosened and the connective scar tissue softens and shrinks, the fascia is able to reduce its tension. The musculoskeletal structures are then able to increase their range of motion and utilize their full strength potential and in addition nerves, blood vessels and lymph nodes located in this released tissue are able to function more optimally.

A Bowen move activates the following mechanisms for self healing:

Stretch reflex:
Most moves are done either at the origin, the insertion, or the belly of the muscles, where the “Golgi” cells receptors are located, informing the nervous system on the state of tension, length or stretch in the musculo-tendonous tissue. These receptors are stimulated during the “challenge” and the “rolling” part of the Bowen move. In case of a pain – muscle – spasm loop, we can break this vicious circle by changing the stimulus received by the nervous system.

Joint Proprioceptors:
All moves done around a joint directly affect the joint, capsule and ligaments, that are richly innervated with Proprioceptors. Here again, stimulus will be received by the nervous system, inviting normalization of the joint function, without the need for forceful manipulation.

Fascia:
Each Bowen move is done at the level of the superficial fascia and affects the relation between the fascia and the nerve, muscle or tendon being mobilized. Fascia plays a major role in muscle co-ordination, postural alignment and overall structural and functional integrity. Following injuries, all these will be negatively affected, because the fascia will stiffen, contract, torque and dehydrate, as shown by the work of Ida Rolf and many other osteopaths. Following a Bowen session it is not uncommon to see adhesions loosen up, scar tissue soften and posture and mobility improve, without harsh mobilization or stretching.

Autonomic nervous system (ANS) rebalancing:
The Bowen Technique may have its most profound and important effect here, where the body’s self-healing mechanisms are governed. The ANS controls over 80% of bodily functions and is very susceptible to external stressors. Most people today live in a constant state of high stress and sympathetic ANS over-stimulation. Healing occurs after the ANS shifts from sympathetic to parasympathetic dominance. The Bowen technique seems to catalyze that shift; during sessions, patients often quickly fall asleep or drop into deep relaxation and loud peristalsis can be heard. This indicates a shift towards parasympathetic dominance, with release from stress at a deep level. This could explain why a few Bowen sessions frequently reactivate the recovery process, where healing from trauma, sickness or surgery has stalled or reached a plateau. 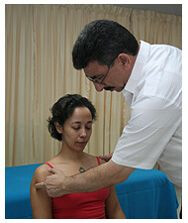 Trigger points:
Several Bowen moves overlap with recognized trigger point locations. By clearing these trigger points, referred pain will be relieved and joint mobility and muscle co-ordination will be improved.

Cell memory:
Scholars have demonstrated that some specific Bowen moves actually act to retrieve the cell memory of the body, accessing its initial “blue print” and reinstalling the parameters of a previous state of wellbeing.